High chemical stability and low flammability made PCBs ideal for many applications:

High chemical stability and low flammability made PCBs ideal for many applications, but it also gives adverse effects to thehumans health and environment:

PCBs shall be Phased Out 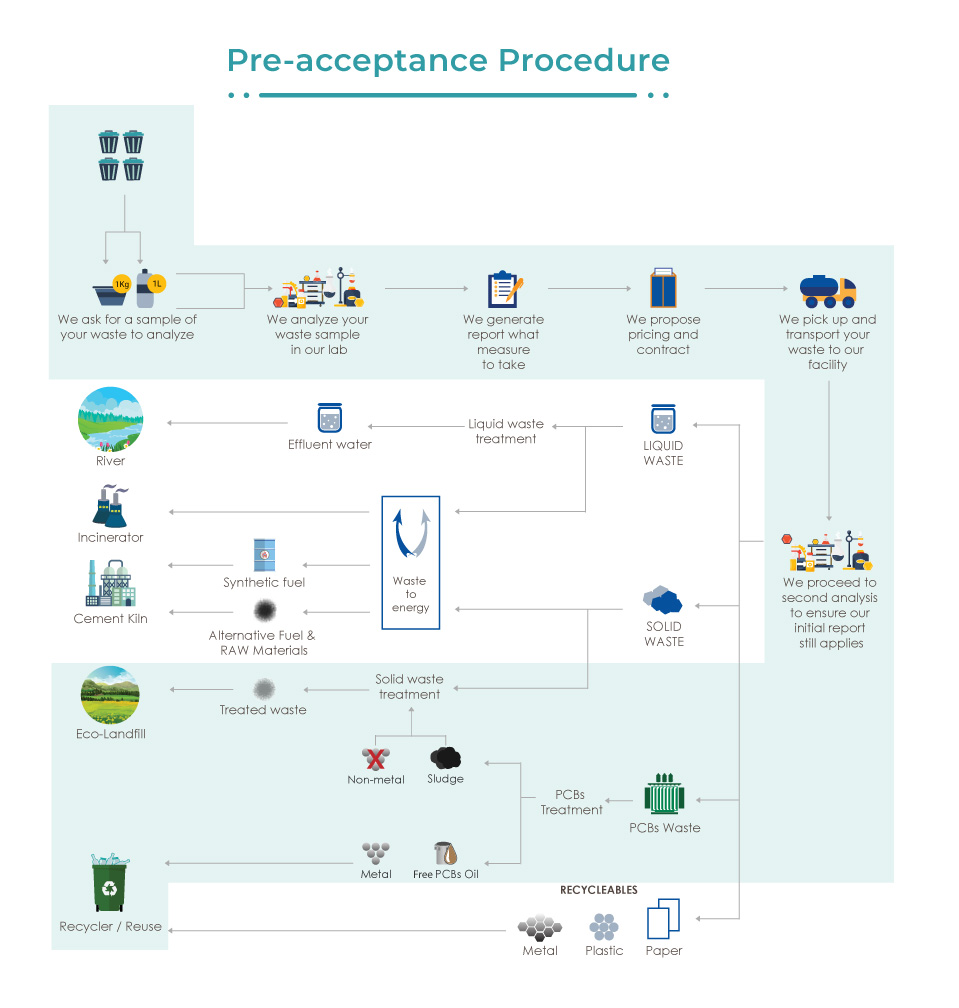 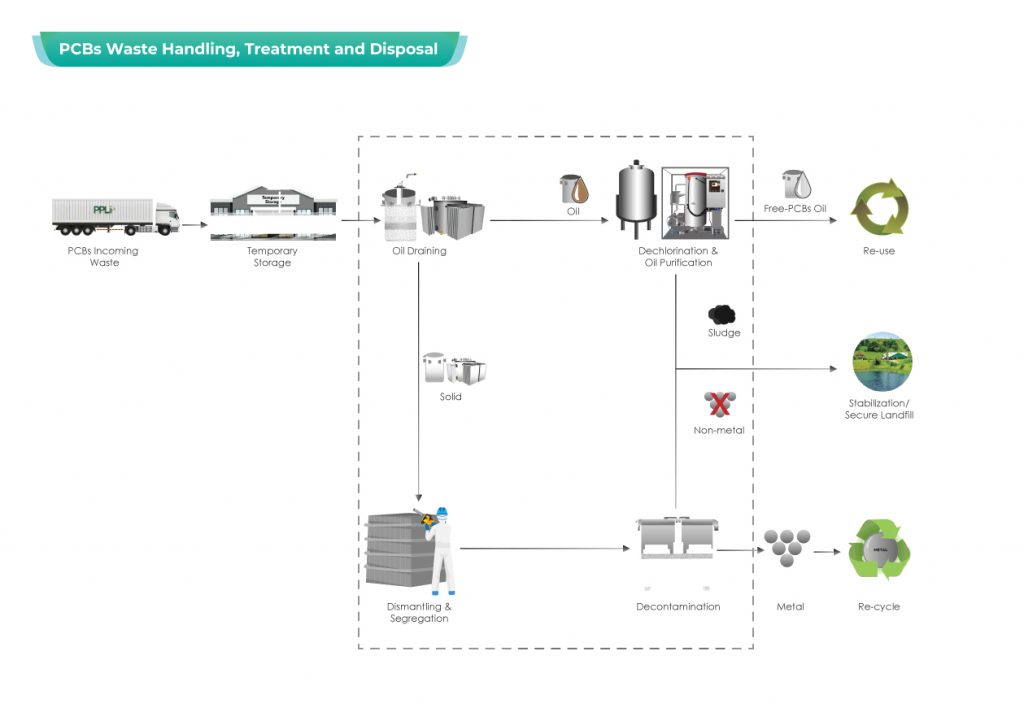 PCBs waste in temporary storage will be moved to oil draining area. In oil draining process, PCBs oil will be pumped out from transformers or drums and collected in PCBs oil storage tank. The capacity of this tank is 5 m3. Oil draining is conducted above oil pan box as a kind of preventive action if there is any spill occured during process. All of this activity is carried out in a controlled area. Furthermore, pumped PCBs oil will be processed in dechlorination and oil regeneration units. The empty transformers will be dismantled and segregated into several types of materials.

Empty transformers will be dismantled and segregated into several types of material such as metal casing, copper, iron, ceramics, or plastic/ paper. Dismantling process is conducted to separate the parts of the transformers according to its type. Metal casing will be cut to adjust and fit with the dimension of autoclave unit (preparation for the next step: decontamination process). Dismantling activities are carried out in a controlled area, where the air in that area will be passed on an activated carbon filter before going out into the environment. Workers for this process are wearing Personal Protective Equipment (PPE) which is comply with safety standard such as respirator, coverall, safety shoes, safety helmet, goggles, and gloves, in order to minimize the exposure to workers.

Solvent will be heated until its vapor phase  and rinse the contaminant in material continuously. The solvent vapor thencondensed using cooling system and recycled in distiller (under vacuum condition) and  evaporated again, and decontamination process repeated. This cycle will continue until the expected PCBs concentration has been reached. So that the solvent will be re-used and still running in the system.

If the decontamination target has been reached, the transformer/ material has already been decontaminated. Material is  removed from the autoclave and “dried” in the drying area which is equipped with an activated carbon filter to ensure that no solvent vapor is released into the environment. The decontamination process workspace is also equipped with an activated carbon filter as a form of anticipation if there is solvent vapor released into the work environment.

Metal material from decontamination process can be recycled, and other material that can not be recycled will be processed and disposed in the landfill.

PCBs oil that has been drained from transformers in oil draning process will be processed in dechlorination unit. This process is carried out in closed system and vacuum condition. Dechlorination process is the removal of one or more chlorine atoms in PCBs molecule using alkali metal. The reagent used in this process is sodium metal (Na). Sodium metal will form ionic bond with chlorine atom and combine into NaCl salt. Furthermore, PCBs molecule will turn into simply biphenyl (non-chlorinated). The chemical reaction occured as follow:

The dechlorination reaction process takes approximately 30-60 minutes and periodically sampling is carried out to determine the concentration of PCBs in the dechlorination tank. When the process is complete (the PCBs concentration has reached the set target), the oil is ready to be filtered. Bleaching earth is added before the oil enters the filtering unit. Oil free PCBs from the dechlorination tank, after the temperature is lowered then filtered using a filter press. The filtered oil free PCBs will be further processed in the oil purification unit. The filtered cake or sludge is processed by Stabilization before being stockpiled in landfills.

Oil free PCBs from the dechlorination process after the filtering process are pumped into the purification unit to reduce the water content to 10-15 ppm and remove dissolved gases. After this series of processes is completed, the oil free PCBs have been purified and ready to be used again in
the transformer and have met the transformer oil standard/ specification. 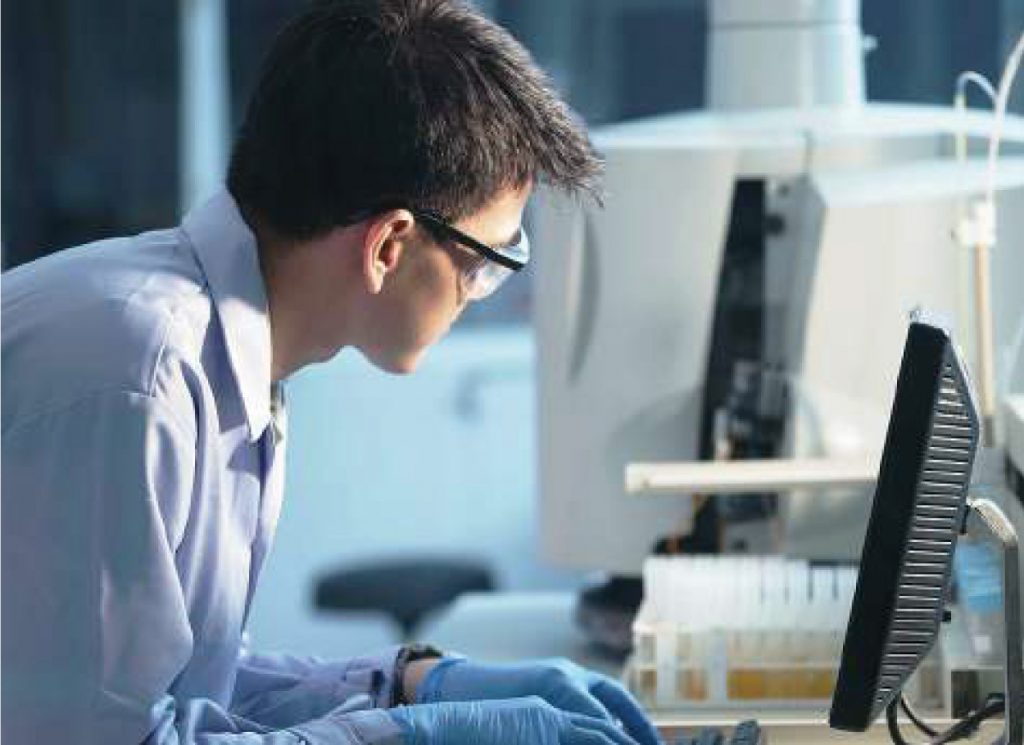 Quality control is conducted by a qualified
analytical laboratory as certified by :