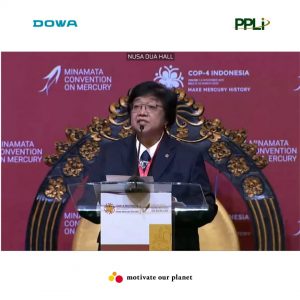 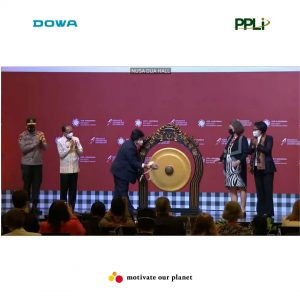 Mercury has been widely used in the mining, agriculture, cosmetics, electrical equipment, and even medical industries. However, mercury is a chemical that can be very damaging if we treat it improperly. Mercury pollution easily spreads through the air, soil, and water. High mercury exposure can also cause damage, ranging from being corrosive to the skin directly, damage to the digestive tract, nervous system, and kidneys. In addition, mercury is also at risk of disrupting various organs of the body, such as the brain, heart, lungs, to the immune system, fetal disorders and female reproductive function. For this reason, education about the dangers of using mercury needs to be increased, in order to reduce the risk of impacts on human health and the environment caused by mercury compounds and releases. This is the conclusion that was reached by the participants of the Minamata COP 4 international conference in Bali for almost a week. A representative from a hazardous waste management company, PT Prasadha Pamunah Limbah Industri (PPLI), Arum Tri Pusposari informed the need for serious follow-up in strengthening public education regarding the dangers of mercury. In addition to education about the dangers of mercury, the public also needs to know how to treat this waste. Arum added that people need to know that we live surrounded by mercury, such as the use of TL lamps, mercury thermometers, blood pressure gauges, dental amalgam, batteries, high pressure lamps and illegal cosmetics (23/03).

Due to the high dangers and risks of using mercury, her party supports the Indonesian government to intensify education related to mercury. As is known, the Indonesian government through the Ministry of Environment and Forestry (MoEF) from March 21 to March 25 held the Minamata Convention on Mercury in Bali, attended by delegates from 135 countries. The event which was held at the Bali Nusa Dua Convention Center (BNDCC) was attended by more than 1,000 participants including representatives from PT PPLI. The 2022 Minamata Convention on Mercury was attended by the Executive Director of the United Nations, Inger La Cour Andersen, Executive Secretary of the Minamata Convention, Monika Stankiewicz, and the Minister of Environment and Forestry of the Republic of Indonesia, Siti Nurbaya and the Governor of Bali I Wayan Koster.

The term Minamata which is used as the name of the conference is taken from one of the regions in Japan. Back in Japan in 1958 there was an incident of mercury pollution. At that time, PT Chisso disposed of its chemical waste in Minamata Bay in large quantities. The fish are contaminated with mercury and many residents suffer from physical disabilities. Even hundreds of people died from nerve paralysis after consuming fish containing mercury.

PT Prasadha Pamunah Limbah Industri (PPLI) also contributes by traeting waste TL lamps or fluorescent lamps from various industries throughout Indonesia. The processing is carried out safely and according to regulations by using a tool called a bulb eater. This tool is a closed system that is able to destroy the TL lamp while isolating the dust and mercury vapor inside. The mercury vapor is then absorbed with activated carbon and a HEPA filter. Furthermore, the lamp fragments as well as activated carbon and the saturated HEPA filter are processed through a stabilization/encapsulation process and safely stored in landfill. PPLI hopes that the community will be more careful in handling mercury lamp waste so that it does not pollute the surrounding environment. Community awareness and participation can help efforts to reduce the potential for mercury pollution, so as to protect future generations from the threat of mercury. (atp)