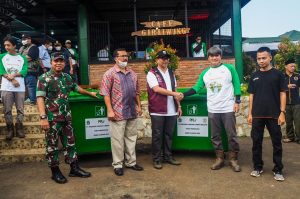 Public awareness of properly disposing of household waste is still far away. Some people in big cities, who are mostly educated people, also do not guarantee that they will not do something disgraceful to the environment.

One of them is the behavior of some residents on the banks of the river, they consider the most practical way to get rid of household waste by throwing it into the watershed. They are not aware that this behavior will cause problems when the rainy season arrives.

The garbage that is thrown into the river turns out to be various, not only plastic or rice wrap, but also used tires, mattresses, cupboards to electronic devices such as televisions, batteries and lamps that are no longer used. They are not aware that electronic goods are hazardous waste that can endanger human lives.

Seeing this, the hazardous waste management company PT Prasadha Pamunah Limbah Industri (PPLI) initiated the collaborative program “GEBER for Clean Ciliwung”. Geber is an abbreviation of joint movement. A term for an activity that is carried out together or collaboratively.

This was stated by the PR Manager of PPLI, Arum Tri Pusposari to the media on the sidelines of the activities of Geber Ciliwung at Rindam Jaya headquarters, Saturday (18/6). The Geber Ciliwung activity lasted for three days starting on June 16 and ending on June 18.

Geber Ciliwung, continued Arum, is a corporate social activity by taking the momentum of World Environment Day which falls on June 5. At the same time, we welcome the 495th anniversary of DKI Jakarta on June 22 and the 28th anniversary of PPLI.

Attending the activity, which was originally inviting the Governor of DKI Anies Baswedan but was unable to attend, started with a land survey of community service activities by KASDAM and Aster Kodam Jaya, then roaming the river from under the TB Simatupang bridge to pier II Rindam Jaya.

A number of officials took part in the river crossing, including Kasdam Kodam Jaya, Head of the DKI LH DKI, President Director of PT PPLI Yoshiaki Chida. After arriving at Rindam Jaya, there was a symbolic handover of several large 600 liter capacity trash bins to a number of environmental administrators on the banks of the Ciliwung river.

Then the event closed with an environmental discussion organized by the Alliance of Environmentally Concerned Journalists (AJPI) with the title “Ciliwung River, A Sinking Potential”. (atp)