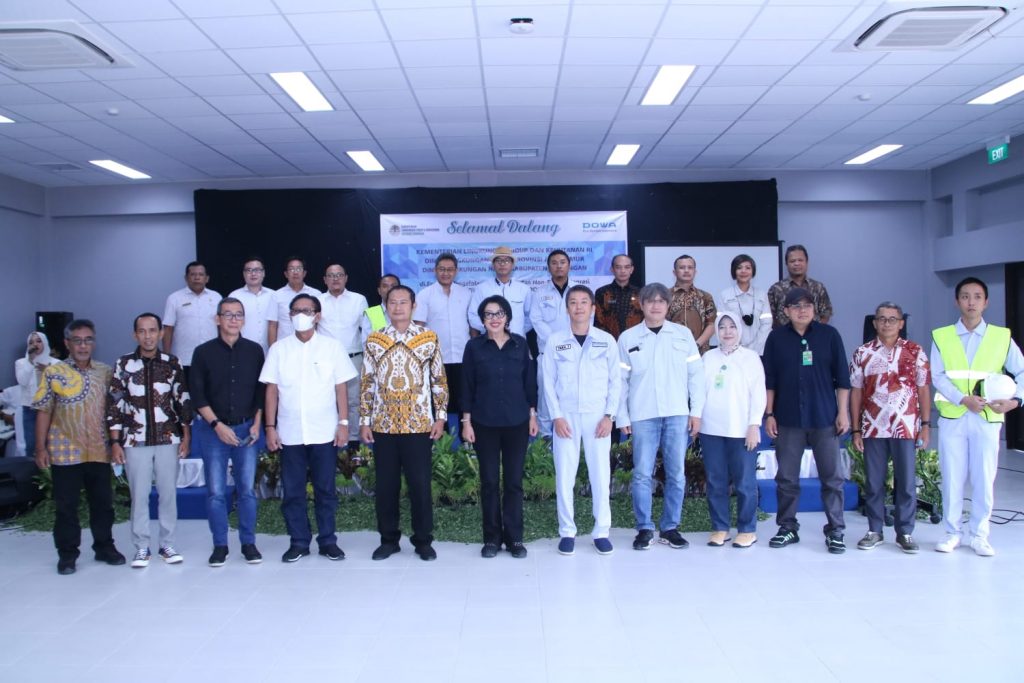 This statement was made by the Director General of Waste and Hazardous Material Management (PSLB3) of the Ministry of Environment, Rosa Vivien Ratnawati, while reviewing the operational readiness of DESI in Brondong, Lamongan, East Java, Friday (16/9).

The subordinate of the Minister of the Environment, Siti Nurbaya, said that all had gone through the research process. From the finding in the field, Dowa is very good and the requirements are more than the requirements set by the government. Rosa said PT Dowa really thinks about safety, so people don’t have to worry about the surrounding environment.

Present at the event the Regent of Lamongan, Dr. H. Yuhronur Efendi, representative of the Provincial Environmental Service, Head of the Lamongan DLH, and the Muspika of Brondong District. From DESI, it was received by Managing Director Takanobu Tachikawa and President Director of PPLI Yoshiaki Chida as well as other DESI and PPLI management.

Managing Director Takanobu Tachikawa explained, PT DESI is working to manage hazardous waste, especially in East Java and Eastern Indonesia with standardized technology to minimize environmental damage. This company has already developed in Japan and entered Indonesia about 30 years ago. Because their work has been recognized, PT DESI was developed to answer the needs of hazardous waste management in East Java and Eastern Indonesia. DESI prioritizes 4R (reduce, reuse, recycle, and recovery) services. From that concept, DESI contributes to making Indonesia better in waste management.

PT DESI is a subsidiary that will carry out waste management in East Java. Previously, the company’s holding company, Dowa Eco-System Co. Ltd., based in Japan, has more than 100 years of experience in treating hazardous waste in the land of cherry blossoms. Even DESI’s sister company, PT Prasadha Pamunah Limbah Industri (PPLI) is known as a company with almost 30 years of treating industrial waste with a number of clients from large private and government companies such as Pertamina, Unilever, Astra Cevron, and government hospitals.

Currently, PT DESI is entering the final preparation of infrastructure and has touched 95 percent. The facilities used are the same as the holding company, including standardized waste transportation in accordance with the provisions of the Ministry of Environment and Forestry. Then it has laboratories, using waste treatment technology applied in developed countries, and landfill to dispose waste that has been removed its toxic and hazardous materials. PT DESI also absorbs a lot of local workers, especially in the village of Tlogoretno Brondong Lamongan.

Rosa saw that the facilities prepared were quite impressive and according to standards, this company uses good technology so that it can be a model for waste management.

Meanwhile, Lamongan Regent Yuhronur Efendi added that industrialization is very important as a lever for the regional economy. So that the facilitation of licensing in industrial development will be facilitated. In line with this, the government is also committed to protecting the environment. So that the presence of PT DESI is expected to present a good ecosystem in Lamongan, especially in waste management. Yuhronur hopes that this waste management will provide many benefits for the environment and both protect the land from being contaminated with harmful substances. (atp)